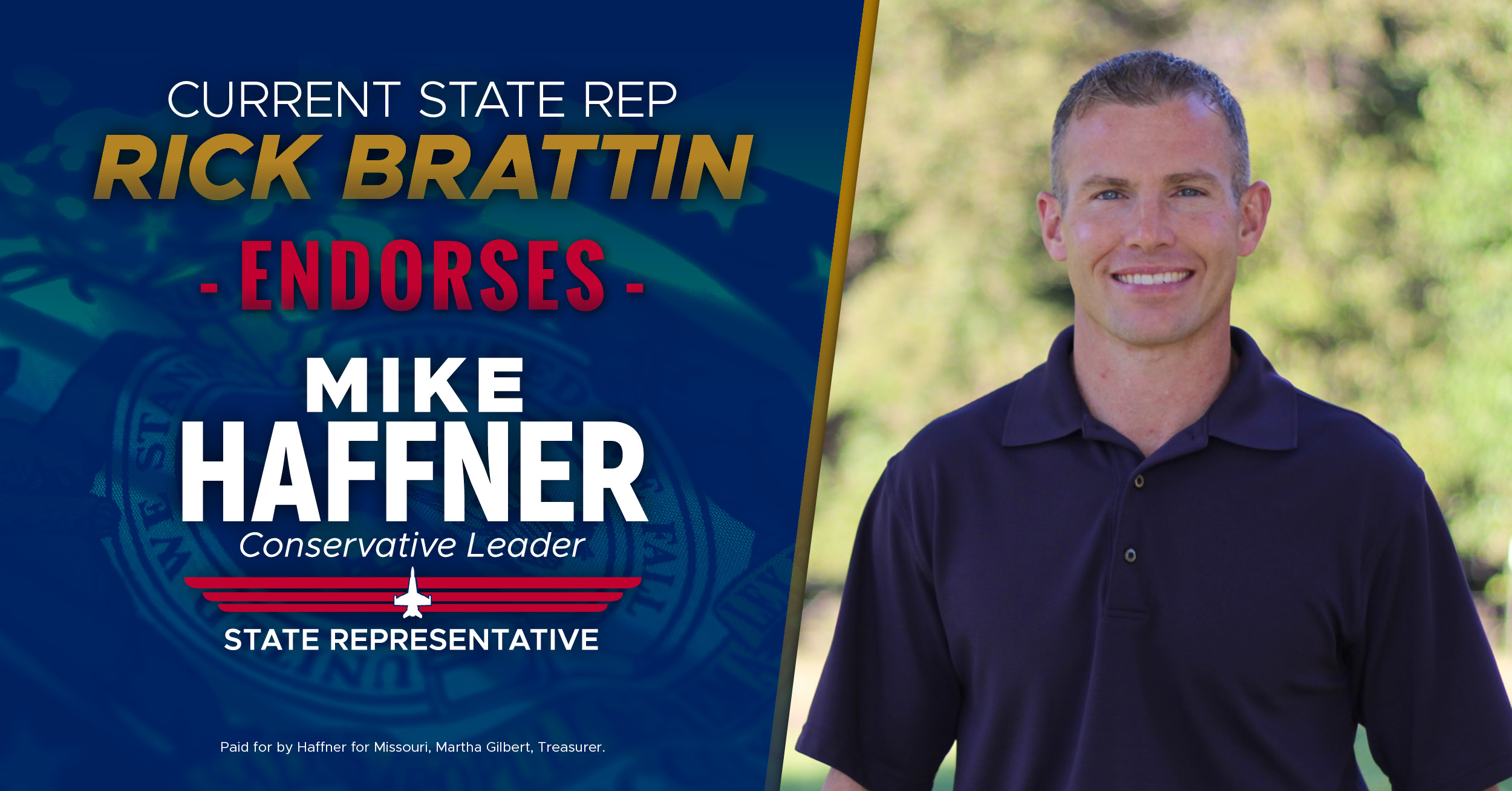 Rep. Rick Brattin said he “proudly endorses Mike Haffner to carry on our conservative mission as the next state representative from the 55th District.  Mike Haffner is a highly decorated Naval Officer. He is a fighter pilot and former F/A-18 squadron commander with three combat tours under his belt. Haffner will not waver in defense of the Constitution. He will give the citizens of Raymore, Peculiar, Harrisonville, Pleasant Hill, Garden City, and the surrounding areas the strongest possible voice in Jefferson City.”

In response, Haffner went on the record stating that he is “honored to accept Rick Brattin’s endorsement. Rick has been a tireless advocate for conservative principles. He has never forgotten where he came from. Rick went out of his way to fight for his constituents. Too many people allow Jefferson City to change them. Rick never did. He remained faithful to the citizens of Cass County and worked hard to bring Cass County values to the Capitol. I promise to honor that legacy when I am elected.”

Haffner’s depth of leadership experience is expected to give him a significant advantage in the race to August 7th. Mike Haffner is a small business owner and farmer. He is an Elder at Cornerstone Community Church of Harrisonville and a retired U.S. Navy fighter pilot who led his squadron flying missions off the deck of the USS George Washington to protect New York City immediately after 9-11.

“Mike Haffner is a strong family man and a successful small business owner. He will represent common-sense, conservative Christian values that the citizens of Cass County expect from their elected officials. Mike Haffner is a conservative leader and the only reliable choice for conservatives in the Republican Primary. He has earned my support and I humbly ask you to join me in voting for Mike Haffner for State Representative in the 55th District on August 7th” said State Representative Rick Brattin, 55th District.

The fight for the 55th is expected to be a competitive Republican Primary Election between current County Clerk Michael Vinck, Harrisonville School Board Director Bing Schimmelpfenning, and political new comer Mike Haffner. There is currently no Democratic candidate. Election Day is August 7th.

Mike Haffner has been married to his wife Teresa for 30 years. They are proud parents of successful adult children and have one grandchild with a set of twin grandchildren on the way. After retiring from the U.S. Navy with 20 years of active duty service the Haffners returned to Teresa’s home state where they have owned and operated Pumpkins and Pines Christmas Tree Farm for 16 years. They have been active supporters of the Shiloh Pregnancy Resource Center in Harrisonville. Mike also served on Congresswoman Vicky Hartzler’s military advisory committee.